The Memorial Day Procession in Big Bear Lake begins at 9:30am this morning at the intersection of Village Drive & Pine Knot Avenue, followed by the Ceremony at Veterans Park. Everyone is invited.
Posted by BBV at 8:28 AM No comments: 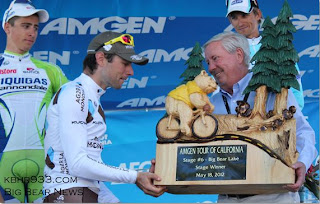 Amgen Results
Frenchman Sylvain Georges of AG2R La Mondiale won the climb to Big Bear of the2012 Amgen Tour of California. Exhausted and completely rung out he crossed the finish line with the main field of riders closing in.  Thousands of spectators watched cheered and rang their cow bells as Sylvian dug deep up Summit Boulevard to the finish arena. The Frenchman Sylvain nearly collapsed then sat on the pavement as his team matesand fellow riders came to congratulate him on his emotional and grueling stage win.

StageWinner Sylvain Georges went on to say that this was the biggest win in hiscareer.  He felt strong early on in the stage and knew he had the legs tofinish.  Near the end he knew it was all or nothing so he gave it his alland came out victorious. 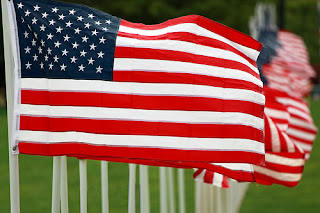 Kick off your summer right and spend it in Big Bear Lake. May is one of the most beautiful months to visit Big Bear because the weather is amazing and the lake activities are in full swing! It is the best time of year for kayaking, stand-up paddle boarding at Captain John's Marina and much more! Don't forget that Big Bear also has a variety of hiking and biking trails for anyone looking for an adventure! The Scenic Sky Chair will also be open Memorial Day Weeked so you can take a relaxing ride on the chair lift to the top of Snow Summit, have lunch at the View Haus and take a leisurely ride or hike back down to the base. Big Bear Vacations has over 300 vacation rentals including lakefront rentals with game rooms, boat docks and much more! Most companies require you to stay three or more nights on Memorial Day but not us! We are only requiring a ONE night minimum stay for all new reservations, but we are confident that you will want to stay longer! To make a reservation with us. please book online or call us at 1-855-829-0937.
Posted by BBV at 6:15 PM No comments:

Big Bear Lake is proud to be hosting the finish of Stage 6 of the Amgen Tour of California, on May 18th, 2012. If you plan to be traveling to Big Bear Lake on race day, please view the spectators guide to help avoid traffic and find the best place to view the race. If you are joining us at Snow Summit to watch the racers come across the finish, don't forget to visit the Big Bear Vacations booths located in the Lifestyle and Cyclist Expos. The expos will be open between 11am and 5pm and the racers are expected to start to cross the finish line around 3:30pm. If you plan to stay in Big Bear for this event check out our specials page or call us at 1-855-829-0937 for the best lodging deals in town. We hope to see you there!

The Jim Hall Memorial, May Trout Classic will take place on May 19-20th, 2012 at Big Bear Marina. Big Bear Municipal Water District is hosting this event. The top nine largest trout caught at the 30th Annual Jim Hall Memorial May Trout Classic share or split $8,000 in prize money (based on 500 entrants), and new this year is an opportunity to catch a tagged trout worth $10,000. The May Trout Classic is Saturday, May 19 from 6 a.m. to 6 p.m. and Sunday, May 20 from 6 a.m. to 2 p.m. The two day event is open to all ages and skill levels. Entry fee is $65 for adults and free entry for juniors (16 years and younger) with a paid adult. Entry forms are available at The Big Bear Visitor Center, 630 Bartlett Road (in the Village); Holloways Marina, 398 Edgemoor Rd.; Big Bear Marina, 500 Paine Court or The Big Bear Municipal Water District, 40524 Lakeview Drive. To have an entry form mailed or to register for the event call 909-585-4007 or emailJacque@maytroutclassic.com.  Or for more information visit the events website.
Posted by BBV at 1:07 PM No comments: